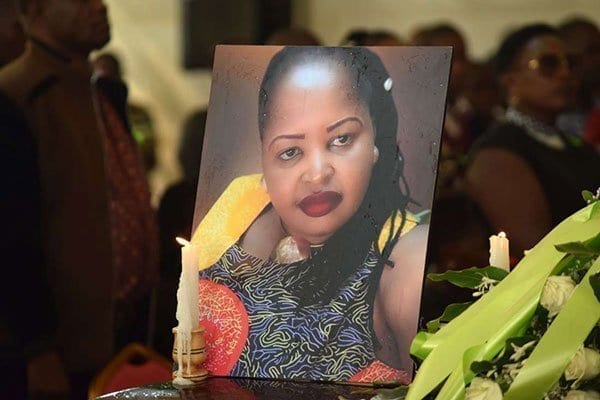 Detectives investigating the murder of businesswoman Mary Wambui Kamangara believe that her husband’s ex-mistress, Ms Judy Wangui, plotted the murder, and that she meant to get back at his family after he dumped her.

The widower, Mr Joseph Kori, has recorded a statement with the police supporting the claims, and the State has picked him as a witness as police seek to strengthen the case.

This came even as the prosecution, through State counsel Christine Ndombi, on Tuesday applied to have Ms Wangui and her co-accused, Mr Michael Githae, remanded until the matter is heard and determined, arguing that their release could jeopardise the case.

Ms Wangui and Mr Githae, a car hire dealer, have been charged with killing Ms Kamangara at the former’s residence at Four Ways Junction Estate on the Kiambu-Nairobi Road.

They allegedly did this by clobbering her on the head with a pressure cooker before strangling her on the night of January 26/27, 2019.

Her body was found in a dam in Juja, near Courtesy Beach Resort. Detectives have established that Ms Kamangara’s murder could have been part of Ms Wangui’s plot to get back at Mr Kori for ending their relationship.

“That the first accused (Wangui) and the deceased’s husband (Kori) were in a love triangle as at the time of the murder, the first accused had parted ways with Joseph Kori Karue. The first accused was hence targeting him and his family,” detective Oliver Nabonwe told Lady Justice Christine Meoli in a sworn affidavit.

The relationship is said to have lasted about two years. According to sources, Mr Kori met Ms Wangui at a car wash point in Thindigua on Kiambu Road where she hawked snacks and rented her a two-bedroom, Sh60,000 a month apartment at Four Ways Junction.

He also bought her a Mercedes Benz identical to his wife’s, and which is currently the subject of an ownership row after Mr Kori accused her of illegally transferring it to herself when they were both in custody.

The detectives said they had further established that on January 25/26, Mr Wangui stalked Mr Kori’s family at their Safari Park estate home, “but her intentions did not materialise on that day”.

They added that this is supported by Mr Wangui’s telephone log data, Mr Kori’s statement, and security guards at Safari Park Estate.

Asking the court to deny them bond, Ms Ndombi relied on a sworn affidavit by detective Nabonwe from the homicide section, which indicated that Ms Wangui and Mr Githae could abscond.

“The accused persons have been charged with a serious offence and if found guilty, they will be sentenced to death, and therefore there is more probability and incentive for them to abscond … I submit that the evidence gathered against the first and second accused persons is overwhelming and justifiable to subject them to pretrial detention as the evidence is strong,” the affidavit reads.

But the assertions we opposed by the accused’s lawyers, led by Cliff Ombeta and Dorine Kalii.

Police noted that the murder took place at Ms Wangui’s residence, where there was a bloodstained knife, bloodstained clothes and swabs on the floor, as well as the clothes used to wrap the body.