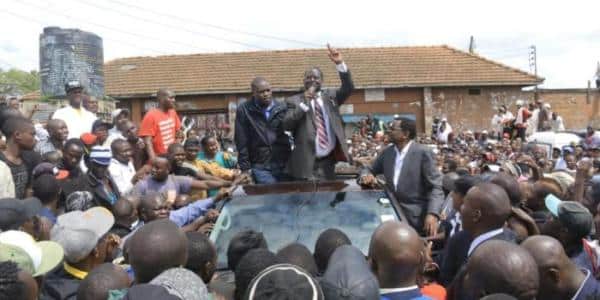 Orange Democratic Party (ODM) Leader, Raila Odinga declared that the country should brace itself for changes that would allegedly steer the nation into a stable future.

Raila was speaking at Burma Market along Jogoo road where he had made an impromptu trip during lunch hour on Monday.

“Don’t be swayed or derailed by politics of 2022. There are things we must fix before 2022. If we don’t stand up now, things are going to get worse,” he asserted.

He added that the sweeping changes would provide a chance to restore much-needed sanity to Kenyan politics and public affairs in general.

In what seemed as a direct hit at his vocal detractors, Raila divulged that his opponents were only out to ensure that the country was left open for wanton plundering by maintaining the status quo.

“Be ready for a political battle between those of us who want a united and prosperous nation and the other group that wants the country to stagnate in corruption and division,” he divulged.

Raila, his political allies as well as supporters have been on the forefront calling for constitutional reforms through a referendum.

His latest remarks echo statements he made on February 19, 2019, in which he hinted at the possibility of a referendum before the year was done.

“This year is going to be a year of change in this country. We want to look at our governance structures and see what needs to be rectified,” he stated.