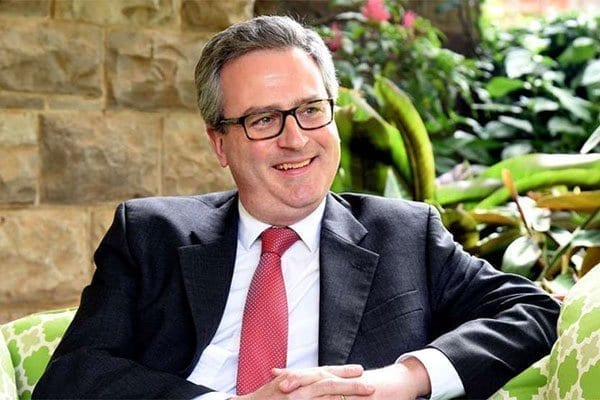 No Visa To UK For Kenyans charged with graft: Nic Hailey, the outgoing British High Commissioner to Kenya, is completing his term in the country having served since December 2015. He spoke to the Daily Nation on a wide range of issues.

YOU HAVE BEEN IN NAIROBI FOR FOUR YEARS NOW. WHAT HAS THE EXPERIENCE BEEN LIKE?

It’s been an amazing experience. One of the great privileges of this job is that the UK and Kenya are connected in so many different ways. So, one day I may be working on security or counterterrorism, the next day I may be working with investors to try and create jobs, the next day we may be dealing with work on development, science and research or scholarships. I could go on and on, but there are so many different things that we work with Kenya on, which means there is no boring day.

WHAT DO YOU THINK WAS YOUR GREATEST ACHIEVEMENT?

Diplomatically, having Prime Minister (Theresa May in August 2018) come to Kenya for the first time in 30 years was a big highlight and I think we also had Prince William — the future King of England — come twice during my tenure. Those big events are likely to achieve a lot of things, they are likely to do a lot of deals and resolve a lot of issues and they require a lot of hard work. But I think the things we are doing in partnership are very long-term. So there are many things that Christian Turner was doing before me and that Jane will be doing after me.

YOU HAD BEEN IN OTHER STATIONS BEFORE. HOW DOES NAIROBI COMPARE TO THESE OTHERS?

Every station is different but what is remarkable about Kenya is what a special country this is for the UK. We are the largest investor, for example. Our companies are the largest investors. One in 10 Kenyans in the formal sector works for a British company. We are your biggest partners in so many areas. We are doing science and research, and some of the things I already mentioned. There is something really special about this relationship and there is a history to it.

LET’S TALK ABOUT CORRUPTION IN KENYA. WHAT CAN YOU SAY WAS TOUR CONTRIBUTION TO THE FIGHT?

Nailing the big fish is the single-most important thing that can be done for the future of this country. As I go around the country and talk to Kenyans, I feel like that is the biggest thing that Kenyans want to see happening. The future of this country depends on a country that is run for the benefit of everyone and stealing from the public purse is the ultimate way of showing that the country is not being run that way.

Of course the UK is your partner, this is not our country. So we are not arresting these people but we are working with Kenyan authorities to make their work easier. We have established a framework for repatriating the assets so once these big fish are convicted, we can bring the money back. We have specialist teams from the UK working out here tracking the assets of the people and we can tell you that we are pretty close to playing a big part in bringing these people to book. I obviously can’t talk about the names of individuals because I don’t want to tip people off but I think we are pretty close to building evidence with the Kenyan authorities.

Speaking out publicly is important and the loudest voices are Kenyan voices, not international voices. But I think the fact that we have taken a strong stand publicly is important and there are certain things we have done like making sure that people charged with corruption won’t be able to travel to the UK. Some people care about that, some people don’t. But we are certainly doing certain things to make it harder for people to get away with it.

ON BREXIT, HOW WILL THE UK ENSURE A SMOOTH TRANSITION FROM KENYA-EU DEALS TO SPECIFIC UK-KENYA DEALS?

What Kenya gets at the moment is duty-free, quota-free entry into the EU market. So, unless it is a gun, you can export as much as you like without any tariffs. And what we have guaranteed is that we will maintain that after Brexit. We will do that whether there is a deal or no deal (on Brexit with the EU). That is the short term. Longer-term, we will want to have a whole range of discussions with Kenya on how to deepen our trade relations. We will look at deals on investments and everything else. But in the short term, getting the transition right is important.

Amisom is doing a remarkable job and I think it is important to acknowledge the sacrifices being made by Kenya. On the financing of Amisom, we have always been a big player in that within the European Union which is the main source of financing. But we have also added to that. When the Prime Minister came last year, she announced that above what we pay within the EU, we will also be putting in extra seven million pounds to make sure Amisom gets more funding. So at the moment we are contributing both through Amisom and bilaterally and I expect that would continue because what Kenya is doing in Somalia is not just Kenyan security but world security.

There are all sorts of things we are doing to make the force more effective. For example, down in Embakasi, we have set up a counter-IED Centre with the Kenya Defence Forces. The Germans have now contributed to that as well and we are working with the Americans to have them contribute to it as well. Kenya is losing people to these bombs that are buried on the roads or detonated. We have now trained 1,500 forces through that centre and many of them are trainers themselves and they are going to train other troops. Last year, casualties from IEDs were down by a third because of the training but the number of IED strikes is still the same.

YOU ARE LEAVING AT A TIME CRITICS SAY THE UK VISA REGIME IS SOMEWHAT HUMILIATING TO KENYANS.

I recognise visas is an issue that is raised by many Kenyans. We don’t make visa decisions here at the High Commission as you probably know. They are made globally and remotely, often in the UK or elsewhere and people apply through a private partner here in Nairobi. But I know this really matters to people.

What I would say is we are very transparent about the timelines so the 25 days that an application takes, we are very clear about that and we monitor very closely whether that deadline is being met and in all but exceptional cases, the visa decision is made within that time period.

WHAT IS THE MARK THAT YOU ARE LEAVING IN NAIROBI?

To my wife’s delight, I haven’t got married here. I know Kenyans sometimes have more than one wife but I am very happy with the one that I have got.

Kenya has left a very strong mark on me. There are things that my family and I have done here that we will never forget and we will be ambassadors for Kenya as we leave this country wherever we go around the world.