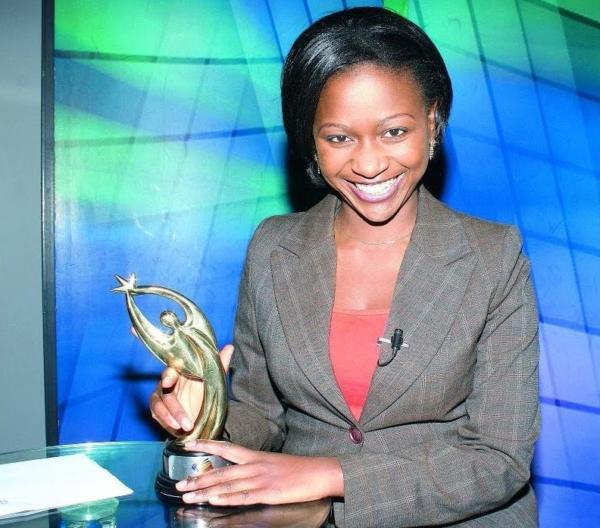 Esther Adongo Arunga was the quintessential newscaster and an inspiration to many budding journalists if her 2008 CHAT Award for best Teen TV Anchor/Presenter is anything to go by.

But many fans were left confused when the one-time star KTN news anchor publicly made some shocking announcements regarding politics, her relationships, spirituality as she rebuked the “satanism” that, in her books, had riddled the Kenyan political system.Some would argue that she was headed for a nosedive when she joined the bizarre Finger of God Church, an establishment run by her distant relative and talented saxophonist Joseph Hellon. It was there that she met Wilson Malaba, a former church elder, and later husband Quincy Timberlake.

Esther Arunga and Wilson Malaba started dating in 2009 getting engaged shortly thereafter.In a past interview, Malaba said they started dating in October 2009 after he had consulted his then pastor, Hellon.Hellon gave his approval for the two to get engaged saying that they were “spiritually connected.”“We started dating in October 2009 after talking to my then pastor, Hellon, who told me that we were spiritually connected. At that point, I thought why not. We got engaged after two months of dating,” said Malaba.Their engagement only lasted some four months. They called it off just two months before their planned wedding in April 2010. She then packed out of her parents’ home to live in a church-owned mansion with Hellon, his wife and several other church members.

According to Malaba, their relationship turned sour when a former dancer in Bikassy Bijo’s Congolese Band,  Quincy Timberlake, met Arunga.Malaba said that he received a text message from Arunga one morning asking him to stop calling her and also accusing him of adultery.One evening, he also got a message from his pastor at the Finger of God Church telling him that he was no longer part of the congregation because he was a freemason.“They (Wilson Malaba and other new members) came to church, fellowshipped with us and were part of the ministry, they counselled and prayed for people but they were freemasons,” Esther Arunga claimed in an interview.

She claimed that Malaba and the rest of the newcomers came to their church and befriended Pastor Hellon and that they were unaware of their true intentions.The drama cost him several business deals and clients but Wilson Malaba has since made it clear that he has moved on, happily.“My relationship with Esther is over and I’d rather not be asked to comment on her life. She is no longer a part of my life. It’s annoying that people still call and send me links to update me about her life. That chapter is closed. I am happily married to a beautiful wife with whom we have a child. My family is my priority now,” he said.

Amidst the drama between her and Malaba, Esther met Quincy Timberlake through Hellon.Quincy and Arunga tied the knot on March 3, 2010, despite great opposition from her parents.The got married while Quincy was still in custody for running an unregistered association, although the Finger of God Church had been registered for five years at the time. Arunga had also just been released from custody, with similar charges, when they took their vows.

“The reason I fell in love with Quincy is; when everybody had run away, apart from the very few; when everybody did not believe me, he stood by me through what I’d call the hardest and toughest time in my life. That does something to a woman… When you love someone it’s not because they are perfect, but you learn to love imperfect people perfectly, “ said Arunga, when questioned about their relationship.Arunga had also once said that one of “her biggest achievements was persuading Quincy Timberlake to marry her.””My marriage is the epitome of all love stories that Shakespeare wrote about,” Quincy Timberlake once described his marriage to Esther Arunga.Years later, Joseph Hellon has distanced himself from Quincy Timberlake calling him a “conman and a Cybercriminal.”

When asked if he brought Ms Arunga and Timberlake together he said, “No we do not match make. The Bible says you marry the person of your own choice, not the preacher’s choice.”Hellon said that it was a mistake for Arunga’s parents to fight Quincy.The couple had their firstborn son, Sinclair Timberlake, in December 2010.

In the same year, Arunga filed a case against her parents claiming that they had infringed on her rights and freedom. She wanted the court to prevent them from being in control of her decisions and choices. She later dropped the charges.

The very month that she called off her engagement to Maloba, Hellon, Esther and Quincy announced their political ambitions. The bizarrely named PlaCenta Party (Platinum Centralizer and Unionist Party) of Kenya was formed. Through it, the trio would find their footing in the 2012 General Elections with Hellon as a presidential candidate, Esther as his running mate and contender for the Karachuonyo parliamentary seat and Quincy as the party chairman.“I’ve always known I have a calling; I’ve always known I’d go into politics. I just didn’t realise it would be this quick. Or this dramatic…. My name is very significant. Esther saved her people and Kenyan’s have too long been under the grip of freemasonry, and I’ve been called to save Kenyan people,” said Arunga.Arunga likened their political ambitions to Noah’s Ark and Obama’s presidential bid, the people laughed but they made it anyway; except that was not the case for them.“You should not be afraid of trying something new.

Noah’s Ark bouyanced (sic) on floodwaters for 40 days and 40 nights. On the other hand, the Titanic was built by professionals and it ungraciously sank on its maiden voyage, with all that science could offer! I know I’m not the most likely candidate for Vice President’s position… I’d urge everyone to let the youth have a chance – believe in the youth; let this seedling of hope bear fruit,” she said.They, however, never followed through with their bid as Arunga and her husband moved to Australia following the release of Quincy who had been arrested on allegations of running a cultic sect (Finger of God Church).Arunga resigned from her KTN job the same day she announced her presidential bid.

The Timberlakes took off to Dubai where they stayed briefly before moving to Melbourne, Australia in early 2012 claiming that they felt “unsafe” in Kenya.She got Australian citizenship and worked as a barrister at the New South Wales Supreme Court.“I got tired of getting locked up by police at my parents’ whim; I was tired of being sedated by a psychiatrist. In any case, I am earning good money here in Melbourne as a barrister,” Arunga said.A few years after their departure a group of Kenyans launched a social media campaign to ‘Bring Arunga Back.” The campaign sought 100,000 signatures which were realised, but it was not enough to convince Esther to jet back into the country. She told an Australian journalist that if she had to come back, Kenyans would have to accept her husband as well, “you cannot love one half and leave the other”.

Sinclair Timberlake with his parents Quincy and Esther Timberlake. [Courtesy]In June 2014, their firstborn son Sinclair Timberlake died after what was initially described as an accident at their home in Kallangur Australia.The couple told police that their three-year-old son had fallen down the stairs while playing with a sibling.Police, however, smelt a rat. Esther changed her account of the events frequently and privately told them that she believed her husband was mentally unwell.Quincy Timberlake admitted himself to a mental hospital on July 3 but a week later he was made an involuntary patient.

Esther would later tell the court that her husband had squeezed the boy’s stomach repeatedly and thrown him against a wall in a bid to rid him of demons that had possessed him. She said her husband “was speaking as if he was attempting to save him [Sinclair] from alien embryos implanted in his stomach”.”She then observed the father of the deceased punch the deceased in the stomach with his fist,” read court documents.In September 2014, Quincy was charged with the murder of the child, to which he pleaded not guilty. Esther Timberlake was later charged as an accessory and was released on bail.She gave new evidence that her husband had used the healing techniques on the boy and had pressed his stomach repeatedly and thrown him against a wall.

In July 15, 2019, Esther Arunga pleaded guilty to being an accessory to the murder of her son. She also admitted to lying to the police so as to help her husband avoid punishment.According to the Australian Associated Press, Crown Prosecutor Danny Boyle told the court that Arunga had called emergency services and told them that her son had fallen down the stairs.

An autopsy later revealed that the cause of death was “as a result of severe blunt force such as punching or stamping or similar”, which was not consistent with a fall.The prosecutor said that Esther kept up the lie for 26 days and only opened up when her husband was admitted for a mental evaluation.“I was terrified of being alone and I felt terrible because my husband was sick as well,” she confessed.Arunga’s sentencing will take place in Australia on Thursday, July 18, 2019.

Esther Arunga did not marry my son out of love, Quincy’s mother claims

Central Africa President Kept waiting In The Plan at JKIA