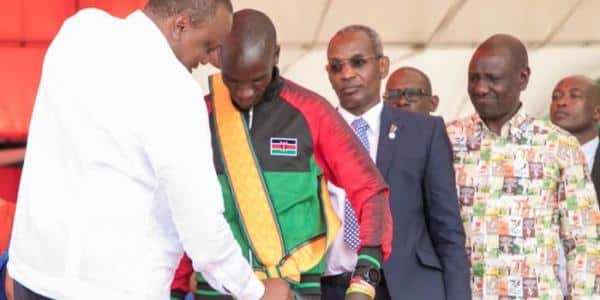 Uhuru honors INEOS 1:59 Champion Kipchoge with highest Award in Kenya: Renowned Marathoner Eliud Kipchoge was on Sunday, October 20, awarded the highest award a civilian can get in the country by President Uhuru Kenyatta at 1:58 p.m. during the Mashujaa Day fete held in Mombasa.

The Elder of the Order of the Golden Heart (EGH) that was accorded to Kipchoge is not only a title as it comes with hefty perks.

According to Citizen TV, Kipchoge will often be invited to national and community functions as a state guest.

Cultural festivals, concerts, and events could also be organised in Kipchoge’s honour if an organisation deems it fit.

Kipchoge will also be entitled to financial assistance from the National Heroes Assistance fund if his economic circumstances warrant such assistance.

Also if he is in need of assistance, he will be accorded the highest attainable standard of healthcare services, accessible housing, outstanding sanitation, and social security.

Of special notice is the fact that these benefits are extended to his dependents as well.

They will enjoy free education and employment opportunities offered only to those with relevant qualifications.

The state recognition also allows for towns, institutions, open parks streets to be named after him.

Kipchoge becomes the first sports individual to be awarded the EGH, which is the most powerful award after Chief of the Order of the Golden Heart of Kenya (CGH) which is awarded to a president.

This is after he became the first human to run a full marathon in under two hours which earned him global recognition.

Up in the sky-The Lord is my shepherd