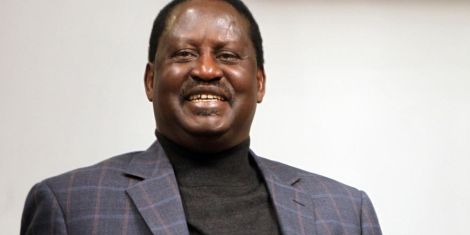 Congratulatory messages began streaming in early in the morning from his colleagues in the political arena, ODM supporters and regular Kenyans.

“On this day, I thank God for the gift of life thus far. Wishing greater things to our country and our people,” Raila wrote as he shared images of himself marking the occasion.

Alongside his wife, Ida Odinga, and two of his grandchildren, a beaming Raila posed with a specially baked cake which featured a Kenyan flag, the opposition stalwart’s name and his age.

Odinga shared cake-cutting duties with his grandchildren as netizens took to social media to wish him a happy birthday.

‘#HappyBirthdayBaba’, referencing one of Raila’s popular monikers, was the top trend in Kenya on Tuesday morning.

” Happy Birthday Baba Raila Odinga, may you live long to see the fruits of years of your toil and labour for this country,” posted ODM Secretary General Edwin Sifuna.

“Dear H.E Raila Odinga. I’m humbled to call you my friend. Kenya can’t repay the sacrifices you’ve done for her. We are your foot soldiers and we’ll go where you send us. We are full of joy,” lawyer Donald Kipkorir shared.

As he turns 75, Raila remains active on the political front and is currently out to popularize the Building Bridges Initiative (BBI) report. The initiative was borne out of his March 9, 2018 handshake with foe-turned-friend President Uhuru Kenyatta following the disputed elections in 2017.