Nairobi Governor Mike Sonko on Wednesday, March 18, officially handed over functions of the County Government of Nairobi to the national government in a ceremony at State House, Nairobi. 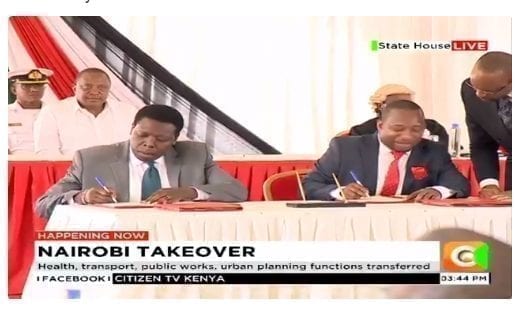 Sonko signed various documents alongside Wamalwa as Uhuru looked on. The changes also officially took effect after the signing of the documents.

An agreement was also signed between the Public Service Commission and the Nairobi County Public Service Board, facilitating the transition process of county government staff.

The Ministry of Transport also took over public transport functions in Nairobi from the county government.

AG Paul Kihara Kariuki also read a citation breaking down the Constitutional provisions on the transfer of county government functions.

Sonko and Wamalwa then posed for the photos, interestingly sharing elbow bumps and leg bumps instead of the usual handshake as a precautionary measure in light of the Coronavirus (Covid-19) outbreak.

Speaking after the agreement was sealed, Uhuru announced the formation of an agency known as Nairobi Metropolitan Services (NMS) to take charge of the transferred functions.

Major General Mohammed Abdallah Badi was named as the Director-General of the NMS. He will be deputized by Enosh Momanyi.

Uhuru tasked the NMS with ensuring quality service delivery to Nairobians and eradicating corruption that has permeated City Hall.

“The biggest problem that the city faces is corruption and cartels that have a vice-like grip. From collection of garbage, to issuance of permits, the cartels have made service delivery almost impossible,” he stated.

He tasked the NMS with the regeneration of the city, assuring the newly appointed Director General that he had the full support of the national government.