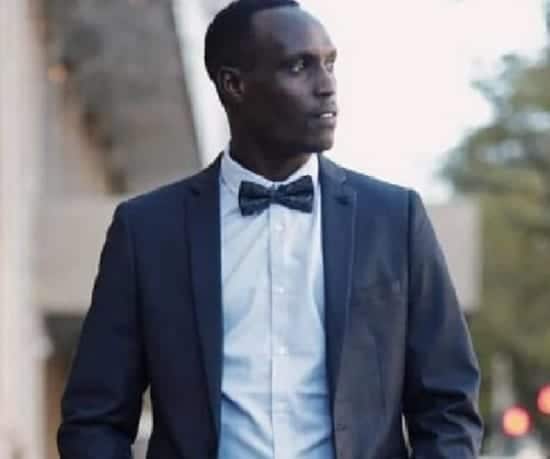 About 30 years ago, when Calvin Mwita was still a toddler in Tarime, Mara in Tanzania, it never occurred to him that he will be among the first-ever nationals from East Africa to successfully venture in the Australian film Industry. “I felt the doors were opening. I had been dreaming of acting as a career for many years,” he opens up to Standard Entertainment&Lifestyle.

Calvin, who graduated with a degree in Accounting and Finance from Mzumbe University in Morogoro, Tanzania, developed an interest in acting during his childhood days. According to the soft-spoken actor, he would pull a crowd at a young age. “I first took the stage around the age of 10, where I was involved in community events such as weddings and parties. I remember being a talkative boy as a little child. I grew up in the era of hip-hop, a music genre in which I found motivation, confidence and inspiration. Hip-hop gave me confidence standing before people at an early age,” he said during the exclusive interview.

It is that confidence that saw him nurture his young talented self, through school life up till he realised he can earn a living by venturing in a different field far from his academic background. “In school, I took part in sports, scouting, music, debating, talent show and student’s governance. I occasionally took part in public speaking and drama, which invigorated my desire for acting,” he continued. Born and raised in Tarime on the Kenya-Tanzania border, Mwita recently made a debut in the Australian movie industry in a Netflix six-part television series dubbed Stateless. This is his first stint on an international platform.

“My first role was in Stateless (2020); a Netflix six-part television series where I played the role of a detainee in an Australian Immigration detention centre. This role came along after many unsuccessful acting auditions previously, and was integral in establishing my appeal as an actor,” he said. The 30-year-old budding actor was overwhelmed when he received the call that informed him he had passed the auditions and would be part of the cast. “Imaginably, I was overly elated when I got that call saying I had won the audition.

‘God is always the greatest.’ That is what was running in my mind and I believed that everything is possible,” he said. According to the former student of Orero Boys High School in Homa Bay County, penetrating a foreign land as an actor came with its fair share of challenges. However, this did not stop the determined soul who had won a scholarship to study a Master’s Degree at Torrens University in Australia in 2018.

“Pursuing acting in Australia may prove to be particularly challenging. Given the geographic landscape and location of Australia, opportunities are often isolated and competition is thick. Nevertheless, this did not discourage me from achieving my dream of becoming an actor. I kept on applying for any open auditions that came up until my dream came true,” he continued.

Sharing the stage with established actors who have already made a name for themselves in the industry was a learning curve for Calvin. According to him, the platform pushed him to become more creative in his career. Calvin plays Taifa Duale in the Australian television drama series, a character he says, was relaxing to bring forth as his lines in the series, were in his native language, Swahili.

This contributed a lot in calming his nerves down as it boosted his confidence on set. “When I realised I would be speaking Swahili in the role, that helped me to have more confidence and relaxed on the set. I had never taken such a big role before and I was nervous and worried, to be honest talking in my own language at some point made my job easier. I had only one chance and I was going to use it perfectly,” he added.

The Netflix show portrays various themes about immigrants who struggle across the world seeking asylum. According to Calvin, playing Taifa Duale not only gave him a boost in his acting career, but also changed his mindset a little bit when it comes to immigration.

“Being cast in Stateless made me see things beyond mere perspectives of a screen actor. I started viewing internationally immigration problems from the perspective of a human being attempting to find peace and security in their lives, and not any associated socio-economic benefit motivations long associated with immigrant crises,” he remarked.

“My biggest and greatest accomplishment as an actor is being cast in Stateless. Being involved in something that big is just like a blessing and a wild dream come true. I really thank the almighty God for that,” he noted.

Comparing the local movie industry back at home with the Australian industry, Calvin concludes the interview by admitting that the local film industry needs a boost in finances to achieve its full potential. “I think back home, all we need is good investors to invest more and more in movies so that we can have better facilities and better productions. This way, we will have quality products,” he concludes.

Isaac Ruto’s next plan after missing out cabinet appointment