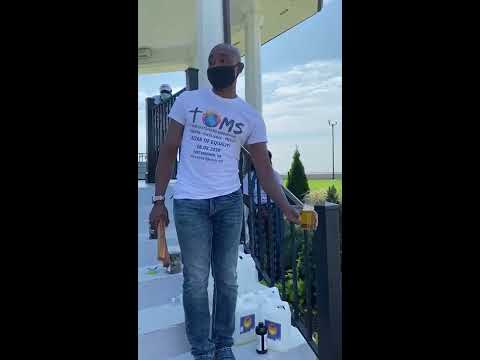 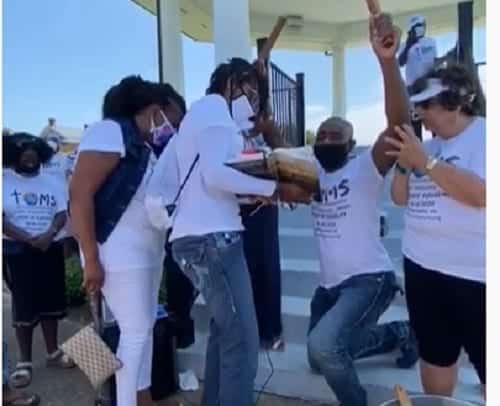 On August 25, 2020,a very significant event happened in the Washington DC Metropolitan area, a group of Pastors representing Africa and the African Americans came together in a ceremony to raise an  Altar Of Reconciliation and Equality:

This event was a confirmation of the prophetic  because the event happened exactly after 400 years since when the first African slaves came to America. The  Pastors from the Washington Metropolitan area gathered at the very spot at Point Comfort (Fort Monroe) in Hampton, Virginia which was a  significant point of entry.

The raising of this Altar of Reconciliation and Equality was intended to signal the end of the era of inequality and oppression that has governed every decade of African American lives to varying degrees since their arrival on August 25th 1619. The significance of this event has only become visible in light of recent events occurring in the United States. In view of what we have witnessed in recent days, it seems that there is a sudden awareness that the Biblical 400 years are up, and children of African descent are no longer content to sit down and watch the perpetration of injustice in silence. And many of non-African descent in the United States and around the world are pausing to acknowledge this very significant phenomena.

In the middle of a worldwide Plague that has affected the United States of America and all other parts of the world, certain inequalities have been exposed for all to see and there is a sense that some event bigger than ourselves is unfolding. The recent death of George Floyd at the hands of the police and countless others has received greater scrutiny than ever before, resulting in endless protests and political uncertainty that is a signal of a much greater global significance that can only be orchestrated and also averted by God. There is not much doubt about that.

According to Kwame Mukong of The Outgivers Ministries in Gaithersburg Maryland and the leader in the ceremony, this event is about a set of slaves from Africa who arrived on the shores of Point Comfort on August 25th 1619. Although “this was not the first time that slaves from Africa arrived to the Americas or other parts of the globe, but it is the starting point for this journey of Reconciliation especially because August 25, 2020 marks its 400th anniversary”

The significance of the event in reference to the Bible

2. In Genesis 15:13-14NKJV, God said to Abram, “know certainly that your descendants will be strangers in a land that is not theirs, and will serve them, and they will afflict them four hundred years. And also the nation whom they serve I will judge; afterward, they shall come out with great possessions.”

3. It is also important to remember that the country of Egypt , where the children of Israel were in bondage for 400 years, were descendants of Ham, one of the sons of Noah. In Genesis 10:6NKJV we read that, “the sons of Ham were Cush, Mizraim, Put and Canaan” These nations today represent Ethiopia, Egypt, Libya and the Canaanites (Assyrians) and most of them  are in Africa. It is also not lost to us that Ham was cursed by his father Noah and was told in Genesis 9:22-25NKJV ” a servant of servants he shall be to his brethren” So, with this understanding in our minds, could it be that what happened in Egypt is a Biblical paradigm for what happened in America for 400 years?

Kwame Mukong and his group says that “Abraham’s descendants were treated as slaves in Egypt for 400 years and they believe that the guilt of Egypt is the guilt of Africa and that it is God’s judgement of this guilt that is the root cause of the enslavement of Africa and the Africans. Kwame adds “And it is our duty to know the number of years that the curse will last.” It is already 400 years and we need to be aware of what this means. He also says that understanding the times of the Lord is very crucial for changing the course of a people. He adds that, “our Christian belief is that God is always right and just in his judgements. Israel went into slavery until Moses came along”

The time has come, and is now here, for the liberation of Africa and Africans. In view of the 400th anniversary of the bondage of Africa and the Africans, the Lord is leading His people to read Isaiah 19. Assuming that The paradigm of bondage in Egypt is playing out in America, could it be that Isaiah 19 is playing out in America after 400 years of bondage and enslavement?
Isaiah 19NIV says,” An oracle concerning Egypt: see, the Lord rides on a swift cloud and is coming to Egypt… I will stir up Egyptian against Egyptian, brother will fight against brother, neighbor against neighbor, city against city, kingdom against kingdom”.  In view of what is happening in America today, do we  need to look further? Could it be that the manifestation of the end of 400 years of bondage is coming to pass?

But let us not lose hope. At the end of all these chaos there is a promise of healing and reconciliation for Egypt, Assyria and Israel.  Kwame adds that this is the promise that motivated them to raise up an Altar of Reconciliation at Point Comfort(Fort Monroe) on August 25, 2020, exactly 400 years after the first African slaves stepped on American soil. He quotes Isaiah19:19NKJV which reads, “In that day there will be an altar to the Lord in the midst of the land of Egypt, and a pillar to the Lord at its border”. If this story continues to play out, then peace and reconciliation will come after the chaos and as Kwame says, this unity of Africa, Assyria and Israel on the Altar of Reconciliation shall be pleasing to the Lord who seeks worshippers (John 4:23). And He will release a new “Samaritan Woman” experience that will cause His children to be reconciled back to Him. ” Like a cord of three strands (Ecclessiastes4:12), Africa, Assyria and Israel shall be woven together as true worshippers to pave the way for peace in Jerusalem, respect of every life, and break the chain of slavery over Africa and Africans”

This significant event according to Kwame shall pave the way to the reconciliation of Africa and Israel. In Isaiah 19: 24-25 we read, “In that day Israel will be one of three with Egypt and Assyria- a blessing in the midst of the land, whom the Lord of hosts shall bless saying, “Blessed be Egypt my people, and Assyria the work of my hands, and Israel my inheritance”.
We are all closely following this story until it is fulfilled. And you thought Biblical Prophecy does not apply to our present day lives? Think Again!
Footnotes
1-3, The Outgivers Ministries Pamphlet
NKJV
NIV

Rev, Kwame is a Minister with “The Outgivers Ministries (Toms)” in Gaithersburg ,MD. Their mandate is to raise an Altar of reconciliation that shall focus on making an impact on God’s children in every street corner, alley, inner city, neighborhood, village, town etc. The above video is a recording of the Raising The Altar at Fort Monroe on August 25,2019.
For more information or to contact the ministry: P.O.Box 86362 Gaithersburg,MD 20886. Tel..844.762.3332.
www.toms-lifestyle.org
[email protected]