Radio Jambo host Joyce Gituro opened up on how a controversial church ruined her marriage and saw her part ways with her ex-husband.

She detailed that the woes commenced after her husband directed the family to join the church which had a questionable doctrine and practices.

The church indulged in incidences which made her wonder why they deserted their previous church which she praised for being devoted to the bible’s teachings. 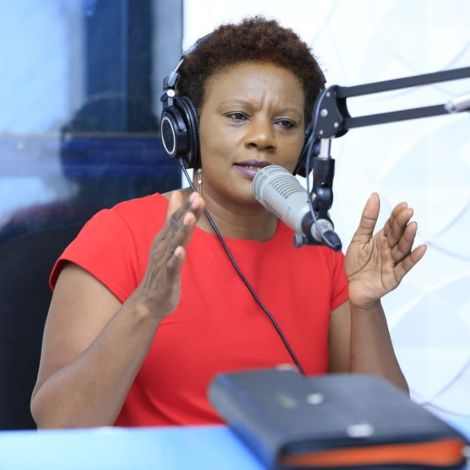 “I remember one day the pastor said we close the windows and doors so that we chase out the devil. I told my husband I am not very comfortable and went out with my kids. When I walked out the pastor did not like it and that is where the problems with my husband began. When I talked to him, he reprimanded me for it,” she stated.

The ex-husband even went to the lengths of buying expensive gifts for the pastor as the children faced school fees debts.

Gituro stated that he fell into outrageous debts and never explained why he secured loans. She suspected that he took all his money to the church. She also accused the pastor of sending threatening prophecies to the husband and filling him with fear.

“I was shocked when one day, he told me that the pastor had stated that our children were not his. Yet they look like him and he knows it,” she lamented.

In early 2008, she narrowly escaped death after the disbanded and dreaded flying squad police unit trailed her over car theft. The car, she says, had been purchased by her husband after she secured a loan to facilitate the trade.

The former Radio Citizen presenter stated that police followed her up to Royal Media Services and told her to be grateful that they had not shot her dead as the car had been reported stolen.