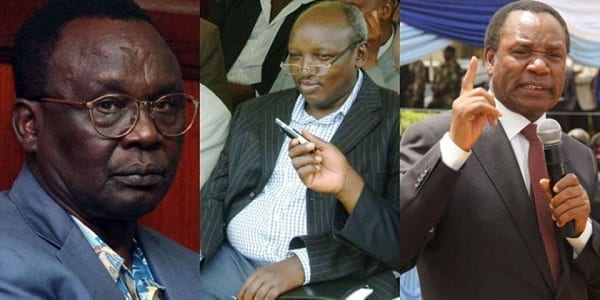 For more than two decades, the nation was under the control of a chosen few from the Rift Valley. Guided by the self-styled ‘professor of politics’, the inner circle of former President Daniel arap Moi gained political and economic power.

A ruthless dictator who ruled with an iron fist, Moi planted his men everywhere and gave them carte blanche to neutralise their enemies. To win over the masses and ensure stability, the regime manipulated elections and installed friendly leaders. The dirty work was done by senior civil servants, top police and military commanders, shrewd lawyers, wily businessmen et al. A majority still call the shots in the vote-rich region.

With Deputy President William Ruto and Kanu boss Gideon Moi pulling in different directions, the former president’s clique is expected to play a crucial role in charting the community’s destiny.

Mr Joshua Kulei is a utility player in this league. Fabulously wealthy, soft-spoken and deceptively shy, Mr Kulei has a vast business empire spanning nearly all sectors of the economy. The former president’s personal secretary also has interests in Namibia, Australia, the United Kingdom and Luxembourg. Well-acquainted with the intricacies of public administration, Mr Kulei is a towering figure in the political landscape.

Former State House Comptroller Franklin Bett and his predecessor, Abraham Kiptanui, also command respect due to their unmatched expertise in governance. “I have never had anything against Mzee’s children and that is why we still meet to date. I have met Senator Moi several times but we have never discussed 2022 politics. I’ve also met Dr Ruto, but we will make a decision at the right time,” Mr Bett told the Nation.

Since 2002, however, an ambitious breed of young businessmen-cum-politicians has emerged.  In the North Rift, David Lagat and Bundotich Zedekiah alias Buzeki are leading the charge. Punching above their weight, the aim is to rally the masses behind them and stake a claim on the region.

Mr Buzeki – who is the Chama Cha Mashinani (CCM) secretary-general – unsuccessfully ran for the Uasin Gishu gubernatorial seat in 2017. He is the founder of Buzeki Group of Companies, which specialises in transport.

“I supported several politicians in Uasin Gishu in the last elections, and I intend to do the same in 2022. Even though some of them are quiet and won’t mention it, I have no problem with their position,” he told the Nation.

Mr Lagat, a Mombasa-based tycoon, is the founder of the DL Group that has interests in tea processing companies, shipping and banking. His vast personal fortune gives him a huge say in elections.

Jamii Telecom chief executive Joshua Chepkwony is another moneyed figure that has invested heavily in the region’s politics.

“Chepkwony has supported many politicians. He follows our politics with a keen interest, that’s why he has interests in Kass FM International. Some of us wouldn’t have managed the campaigns without his financial support,” said an MP.

A close ally of Dr Ruto, Mr Mburu runs a clearing and forwarding company in Mombasa, Landmark Freight Services. It has two branches in China. He also owns multimillion-shilling properties in various parts of the country, including apartments in Nakuru, Nairobi, Kajiado and Mombasa.

In the run-up to the 2013 General Election, Mr Mburu was actively involved in the United Republican Party campaigns. He was instrumental in the formation of the party’s youth league in Nairobi, which was later incorporated in the Jubilee presidential campaigns. His inexhaustible resources propelled Kinuthia Mbugua to victory in the Nakuru gubernatorial race.

Mr Waweru is a high-flying timber merchant and real estate mogul who owns several multimillion-shilling buildings in Nakuru, including Pinewoods Apartments, which he once leased to the Kenya Police Service.

Mr Muya has operations in the travel and hospitality industry, where he runs the Lake Nakuru Lodge and Summit Hotel and the Naivasha Crescent Camp.

Gone too Soon: The passing away of Annah Maitho of Atlanta, Georgia