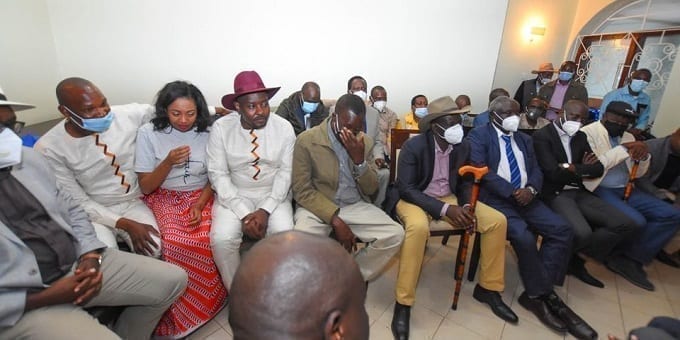 Platforms lit up with political, social and religious humour as Kenyans touched on matters, including the ongoing debate on the Building Bridges Initiatives (BBI) report and the 2022 General Election.

Ms Kihika, popularly known as ”The Iron Lady of Nakuru”, got married at a colourful event on Saturday at her family’s ranch in Marmanet, Laikipia County.

“I salute Susan for such a decision. Balancing a relationship and making it lead to marriage while in politics is not easy. She deserves a man who will treat her like a queen. That is what most ladies long for. Chase your dreams and the rest will follow,” wrote Rose Waithira.

Deputy President William Ruto, who was part of the senator’s dowry negotiation team, said he was delighted that his best friends were uniting in marriage.

Senator Murkomen reveals Why Ruto did not intervene his…

“Congratulations Senator Susan Kihika and Samuel Mburu on this magnificent milestone. Our best wishes and love as you build your lives together,” Dr Ruto wrote on Twitter.

But one Perm Nuric made a reference to the DP’s Hustler Movement, saying he could have convinced his ally Ms Kihika to marry a ”hustler”.

“When it comes to things to do with the heart you belong to the millionaires’ cocoon. You have seriously disappointed and discouraged boda-boda and mkokoteni (handcart) people.”

While pushing the ”hustler” narrative in his political tours in various parts of the country, DP Ruto has been distributing motorcycles and wheelbarrows to youths, saying they can use them to earn a living.

Fred Odhiambo said: “I hope you have gifted them with wheelbarrows for their next lives, Sir.”

Mwalimu Juma said: “BBI has made the man pay dowry. BBI is the way to go. We hustlers support it fully since we have started seeing its fruits.”

Satatu Junior said: “We’re now waiting for Aisha Jumwa’s dowry negotiations so that we know she is also not alone.”

Jaherana Wake gave advice on marriage, telling Ms Kihika, “karibu (welcome) into a new life. Here you must be submissive, show respect, love your [husband], give him peace, trust him, else  [you won’t make it. Marriage] is not for the faint-hearted.”

Piti Kariuki told DP Ruto to drink muratina (traditional Kikuyu brew) and promised to take him five litres of it during his swearing-in ceremony at Uhuru Park in 2022.

Some members of the public, such as one ”‘Joshua The Lion”, quoted Biblical passages and references in their messages of good wishes to the couple.

The Twitter user said: “Congratulations to our chemolel (the beautiful one) for making that important decision in life.  What God has put together let no man put asunder. We can now elect you as a running mate.”

BW Sarah wrote: “Congratulations to big sister Susan on your colourful ruracio (traditional dowry ceremony). He who finds a wife finds a good thing and obtains favour from the Lord.

While noting the importance of getting married when ready, Kennedy Rotich Kibet said, “This is what novelist Ngugi wa Thiong’o meant when he wrote the novel Ngahika Ndenda (I will marry when I want).”

Awiti Flame Qipkirui regretted that he will not fulfill his dream of proposing to Ms Kihika.

“I wanted to propose to Susan. Too bad. I didn’t know she is a married lady,” he said.

Ken Kabix summed it all by urging the couple to get more children.

“In a marriage, a child will unite you more than Ruto. Make sure you have children with Samuel Mburu.”

Are Kenyans in Jamhuri Lazy? The working culture in Kenya vs Abroad

Magufuli and Uhuru in deal to build roads