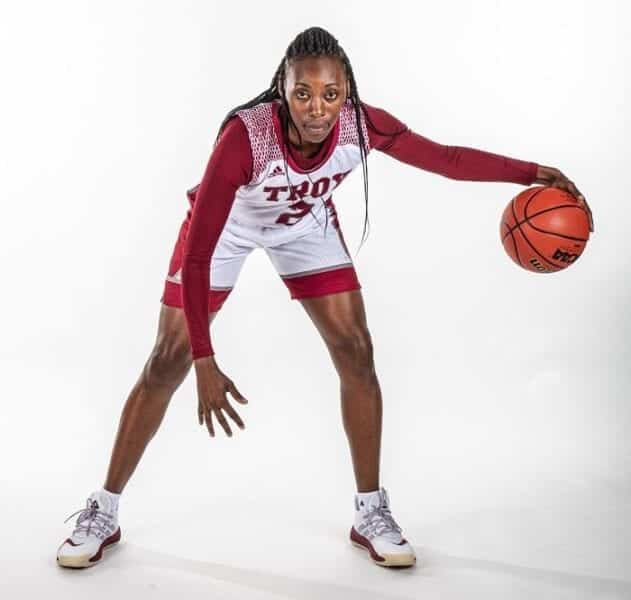 Kenyan Diaspora Felmas Koranga has become the first  Kenyan athlete  to play women’s division one basketball in US.

According to troytrojans.com,  Koranga made history when she signed her NLI to play for the Sun Belt Champions, becoming the first female born in Kenya to play NCAA Division I basketball. The 6-1 forward comes to Troy after a stellar junior college career where she was ranked as the No. 2 JUCO recruit in the country by World Exposure WBB. The highly rated signee was named the 2020 WBCA Two-Year Player of the Year and a First Team All-American by both the WBCA and the NJCAA. Felmas earned All-America honors this past season after averaging 19 points and 13.1 rebound per game in 31 starts while notching 26 double-doubles. She averaged 14 points and 10.5 rebounds as a freshman to earn NJCAA Second Team All-America honors while being named the Region 14 Freshman of the Year. In just two years at Tyler Junior College, Felmas scored over 1,000 points and grabbed 750 rebounds. While playing for the Kenyan National Team Felmas was known for grabbing rebounds as she was the top rebounder for her country

“I‘m humbled because there’s a lot of players out there and even here that could fit really well in this program,” said Koranga. “I’m the one who’s here, so I’m grateful for that.”

The transition to life in Troy hasn’t been too difficult for the 6’1″ forward, especially on the basketball court. Koranga averaged a double-double in the regular season and came up big in the Sun Belt Conference championship game with a career-high 22 rebounds.

“She had a huge role. In our system since we take so many shots, we have a lot of rebounds,” said head coach Chanda Rigby. “She took that responsibility on. She didn’t get distracted with the fact that she wasn’t scoring the most points. She didn’t get distracted with that because it wasn’t about her. It was about doing her job and she did it with the best of her ability.”

Now that the trojans have earned a spot in the NCAA tournament, Koranga hopes playing on the biggest stage in college basketball will aspire other back home to reach for the stars.

“For those I’ve been able to talk to, I’ve always tried to tell them that it’s never to late to start chasing your dreams,” said Koranga. “It doesn’t really matter where you’re coming from. That does not really hinder you from achieving your goals or getting to where you want to.”

Koranga and the Trojans will await their opponent in the NCAA tournament. They’ll find out who they are playing on Monday.

Investing in Kenya: How to build your wealth with Optiven

US Citizens Owning Land in Kenya Must Submit Documentation by August 6, 2013

Ugandans worried about the number of Chinese men marrying their women

A Kenyan man with the US Marines dies in Nairobi, to be buried in Dallas

Magufuli orders “All ministers & public officials to use PROBOX or VITZ”

The Wicked Edition: Kabi and Milly talk about their pregnancy, marriage

Kenyan man found dead in his house in Coventry, UK