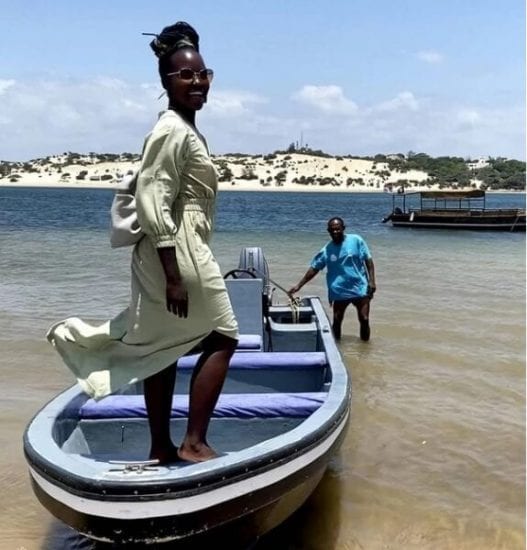 The actress shared photos on social media, announcing her arrival in Lamu County and Netizens were quick to join the conversation with everyone trying hard to have his/her “Karibu” message get noticed by the actress.

“Lamu Tamu | Lamu Damu” reads Lupita’s caption of the photos posing on the shores of the Indian Ocean.

Lupita’s friend Umra Omar also shared their photos together with a caption: “Karibu tena rafiki, this is what 15 years later looks like, not bad at all 🥰 @lupitanyongo”

Lupita’s visit to the Kenyan coast come weeks after quashing reports that she was inaccessible when the Ministry of Tourism was looking for her.

The claim had been made by Tourism CS Najib Balala while he defended the government’s choice of super model Naomi Campbell as its Magical Kenya international brand ambassador.

“I know everybody is asking why not Lupita. Lupita has commitments and her managers cannot allow us to access her. We’ve spent the last five years looking for Lupita,” Nation quoted CS Balala.

Through her verified Twitter handle, Lupita posted a photo of herself mid-laugh, with the caption: “Me when I hear the Kenyan Ministry of Tourism has been looking for me for five years.”

He tweet seems to be a confirmation that she may have not been approached by the government for the position.