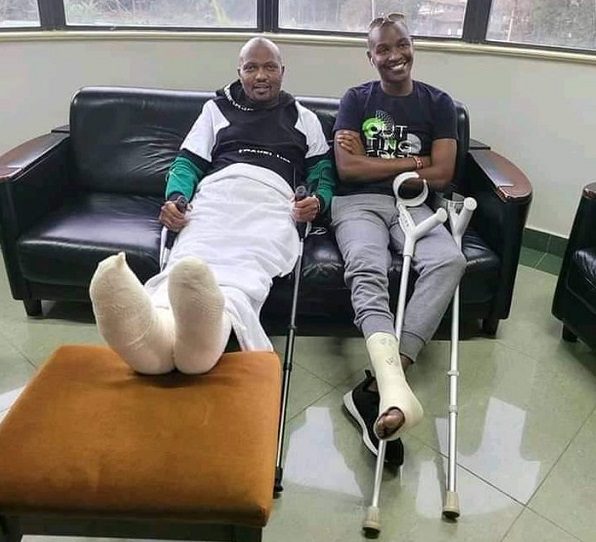 There were lots of speculation from Kenyans as to the cause, being that he had not revealed publicly the reason why he was in Hospital.

All we have seen is a constant stream of politicians and public figures, among them William Ruto, Kalonzo Musyoka, Gideon Moi, Raila Odinga, Jimi Wanjigi, Musalia Mudavadi, Martha Karua, Suleiman Shahbal, musician Samidoh, among others pay him a visit and pose for photos.

It can now be revealed why the firebrand politician is in the hospital.

Speaking to Citizen TV, the MP said that he suffered third-degree burns to his legs, after an electric warm mat he was using seemingly malfunctioned.

“I am in hospital because I was involved in a minor incident in which I burnt my legs,” he stated.

He revealed that the mat, which reportedly costs Sh250,000, was a gift from a friend.

According to the legislator, he followed the instructions to the letter, but still ended up in hospital. “I was first told that you connect it to the power, which I did. I connected it to power and stepped on it. At night, my legs raptured and I had to be rushed to hospital the following day,” he said.

He was rushed to hospital the next morning, and had to go to the theatre after it was established that his burns were quite serious.

He has since gone under the knife 3 times as a result of this incident.

In related news, the company that sold the mat has issued a statement and apologized to Moses Kuria.

“We regret the unfortunate incident that occurred. It is not our desire to sell products that expose the users to any form of danger. The product was purchased by one of Moses Kuria’s friends and we did not know that he had pre-existing health conditions,” their statement read in part.

They have also absolved themselves from blame, going as far as attaching a copy of a certificate indicating that they have the necessary approvals to sell the blanket.

That has not however stopped Moses Kuria from tabling a petition to have the company investigated. He has asked KEBS and the Ministry of Industrialization to explain the criteria used to approve products in Kenya.

He wonders how a mat he used to ease numbness could heat up to the extent of seriously burning his skin.