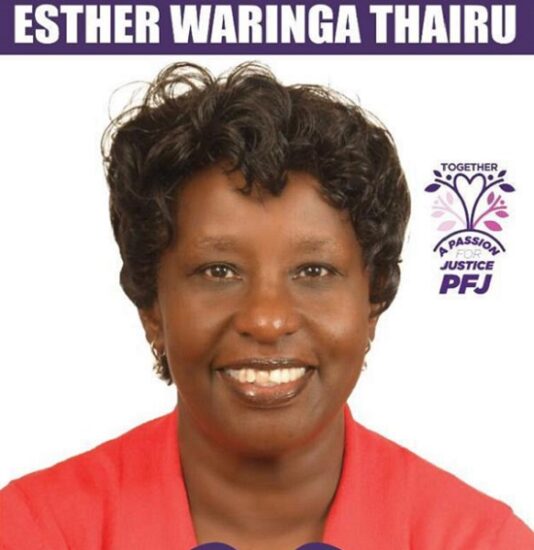 With much known about two top contenders, Johnson Sakaja of United Democratic Alliance (UDA) and Polycarp Igathe of Jubilee, little is known about other contenders.

Kenyans.co.ke takes a look at the profiles of some of these candidates:

Until few years ago, Esther Waringa Thairu lived in the Atlanta Metro area in Georgia where she had resided for over 20 years. She was a member of the Kenyan Community and was very active in the church and social activities. She is now the Chairperson of the Independent Candidates Forum of Kenya.

Anne Kagure is a businesswoman and founder of Ann Kagure Foundation, an organization that seeks to empower the less fortunate in society.

In 2018, Kagure was among four other women that former Nairobi Governor Mike Sonko had shortlisted to deputize him.

In the coming elections, through an independent ticket, she will be throwing her hat in the ring.

Grewal, aged 25, holds Bachelor of Law (Strathmore University), Master’s Degree (Kenya School of Revenue Administration (KESRA). Whether he wins or not, Grewal stated that he will continue uplifting the lives of Kenyans.

He co-founded Asilimia in 2016, and served as a teacher at Premier Academy, Nairobi (Srimad Rajchandra Institute) – from 2021.

Between September 2018 and June 2020, Grewal served as a project development manager- Smart friends.

He has also worked as the head of operations at We Make Impact and real estate manager.

Kodhe is journalist who has worked for both local and international media for years. He has worked as a diplomat with the African Union in -charge of an Organ and as Director General of the Institute for Democracy and Leadership in Africa (IDEA for Africa).

He is a philanthropist supporting orphans and needy children at Saidia Furaha Children’s Home.

He declared interest in the seat promising to address insecurity, health, infrastructure, and water issues affecting the daily lives of city residents.

Nyamwamu is an analyst and registered nurse, largely based in the US.

He schooled at La Sierra University – Bachelor of Science (BS), Computer Science. He then proceeded to University of Maryland Global Campus for Masters of Science (MS), Data Analytics

“My plans to the County Government of Nairobi will be to make Nairobi business-friendly, reduce all business licenses by half, provide electricity and water to all people living in informal settlements, provide and  an app to be used by visa boss riders to help increase efficiency and safety in their business,  Improve service delivery to all Nairobians, develop affordable and reliable public transport in Nairobi to eliminate traffic experienced,” stated Nyamwamu.

Nancy Wambui has been a  Real Estate Developer at Costa Homes. Her manifesto is anchored on creating employment for youth through promotion of social programs art, culture & sports Bursary for students, Studies abroad and Jobs for the youth. Her LinkedIn account says she studied at Punjabi University.

The winner will be the CEO of Kenya’s Capital City County, and the fourth occupant of the dreaded City Hall. Just like their predecessors, they are on a charm offensive pledging on how they will transform the city.

When Mike Sonko was sworn into officer after succeeding Dr Evans Kidero, he promised to transform the capital city by prioritising reliable water supply, well-maintained roads, better healthcare and a proper sewage system.

From 380,000 people by 1965, the city population now stands at about 4.3 million people according to 2019 Kenya Population and Housing Census (KPHC) carried out by Kenya National Bureau of Statistics.