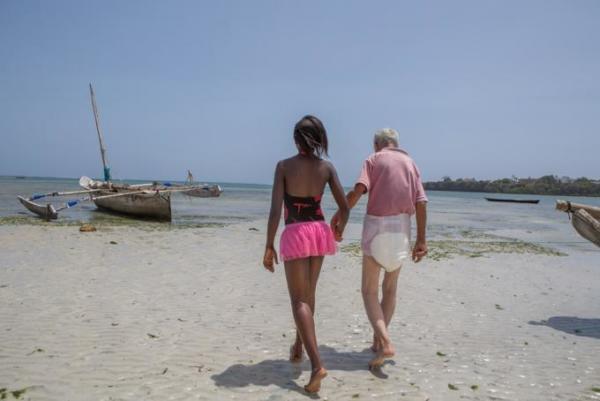 With their parents’ tacit approval, young Kenyans are routinely exploited sexually in Malindi by older foreigners. When the foreigners depart, they leave many broken hearts and lost innocence

“For many girls in Malindi, as soon as they have breasts, they find European boyfriends. It’s now a cultural more than a moral issue,”

Malindi is a charming town dotted with palm trees that whisper a song in the wind. The townspeople speak many languages: Kiswahili, English and Italian.
“It’s the language of trade here”, says Vincent Onyango, a former beach boy who has been fishing along the shores for the last 20 years, says of Italian. “Young girls use it for sex trade; to bargain better prices and lure their clients. Furthermore, to work in the lucrative resorts and hotels, fluency in Italian comes in handy.”
Onyango, now a tour guide, is a bitter victim of sexual exploitation. He walks barefoot and wears well-worn short trousers. I caught with him near a high-end Italian resort.
Onyango knows the town like the back of his hand. He guides us from the neat, organised side of town and walks us through the dingy slum of Maweni, which is littered with polythene papers, clothes, unkempt grasses and mud houses with gaping holes.
There, we meet Frida Zawadi and Mungai Njoroge, two young people who have served as sex workers. The memories of their tough lives still haunt; something Onyango seems to know quite well. He retrieves a roll of bhang and lights up.
“One day I was from fishing and a white woman stopped me and asked if I could sell her fish. But I did not have the type of fish she wanted. So she took my cell number and called me later,” Onyango narrates. The fish business soon graduated to sex and he soon moved in with the woman. A month later, she travelled back to Europe.
“I thought we were in love”, Onyango laments. “She told me so. She acted so. I loved her, and she was young enough to be my wife. She visited my mother and gave her promises.”
After a year, the woman returned to Malindi unannounced, with another man in tow. She had changed her phone number and checked in at a different hotel from the one she had occupied on her previous visit. Onyango was heartbroken.
Frida Zawadi’s story has a similar ring. She was 16 when she “fell in love” with an Italian middle-age man. “He told me that he did not have a wife, but I later realised that he was actually a family man. All he wanted was to use me,” Zawadi says.
But what is that drives young people to such desperation? Poverty is one key reason. Malindi is ranked 137 in the national poverty index. Most of the areas do not have piped water. Rain-fed agriculture is unreliable and many families do not have enough to eat.
Unsurprisingly, many parents turn a blind eye when their children consort with foreign tourists for money.
Because sex trade is widespread, school dropout rate is high. Kenya Community Support Centre puts primary school dropout rate at 48 per cent as of 2010.
Philip Jagero, an officer with Kenya Legal Defence Fund, who has investigated numerous cases of sexual exploitation by foreigners, says parents give tacit approval to their daughters to peddle flesh.
“For many girls in Malindi, as soon as they have breasts, they find European boyfriends. It’s now a cultural more than a moral issue,” he told a news agency recently.
The non-governmental organisation, Solidarity for Women in Distress (Solwodi) has set up an office in Mombasa and Malindi in order to empower female sex workers, children in sexual exploitation, and survivors of human trafficking.

Mombasa county director of children services Elizabeth Mbuka told a local newspaper that curbing prostitution is hampered by fixers and pimps, who are the link between Kenyans minors and their foreign customers.

Other minors travel from other parts of Kenya as Central, Nyanza, and Western provinces to try their luck at the coast.
“Right now we are struggling to reunite some of them with their families. We are trying to get in touch with relevant authorities to help the girls reunite with their families,” Mbuka was quoted as saying.
Haki Africa’s, Julius Ogogoh, who works with the Commission for Human Rights and Justice say the Government should overhaul tourist police department. His sentiments are supported by Fahad Changi, a rapid response officer with Muslim for Human Rights.
“There are private villas, private beaches and apartments in Malindi, Ganjoni, and Nyali where child sex tourism is booming. The police are aware of this but they are bribed to keep off,” claims Ogogoh.