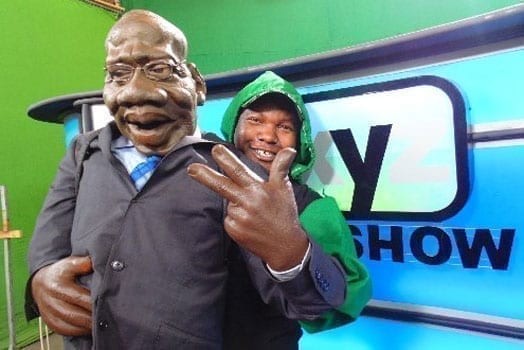 Buni TV’s XYZ Show and its Nigerian spinoff Oga’s at the top have been nominated to the third edition of the prestigious Africa Magic Viewers’ Choice Awards 2015 (AMVCAs).

The satirical political and social commentary that runs on NTV has been nominated under Best TV Series Category and will battle it out with Shuga and Rush, which are also Kenyan shows.

Its Nigerian offshoot Ogas at the top, is an online TV show in its premier season that run from March to June on YouTube. It features five minute-long skits employing the voice talents of Nigerians living in Nairobi.

“There is a huge team behind XYZ Show and this nomination shows an appreciation of their hard work,” Mwapembwa said.

Watch Uhuru and Raila Sing ‘Don’t You Worry Child’.. With…

Other Kenyan productions and actors have been nominated for the continental award with the movie Veve bagging three nominations in the Art Director, Best Indigenous Swahili and Best Video Editor categories.

Others are Kenyan actor Gerald Langiri nominated in Best Actor in Comedy category alongside other big names in Africa’s entertainment industry such as Rita Dominic and Mike Ezeruonye.

AMVCA, is an annual event organized by Africa Magic and Maisha Magic in partnership with Multichoice Africa and is aimed at recognizing exceptional talent in the African television and movie industry.

You can go to www.africamagic.tv and vote for your favourite show.

A Diseases spread by kissing known as mononucleosis or mono