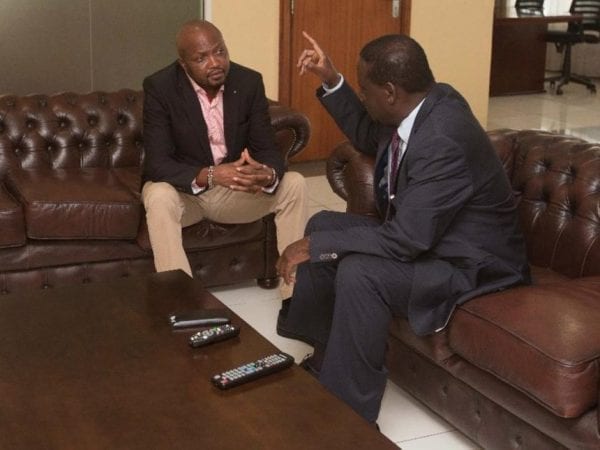 Nasa boss Raila Odinga and Gatundu South MP Moses Kuria met on Monday in another show of efforts to rekindle their once-rocky relationship.

Kuria was accompanied by several other ODM MPs.

“As we continue taking steps the towards national reconciliation, I have this morning held several meetings with different members of parliament,” Raila said in a tweet.

Kuria, who has been a critic of NASA’s political machinations, described the move by Raila and Uhuru as “statemanly”.

“This morning I paid a courtesy call on Rt Hon Raila Odinga. We explored various options towards building a more cohesive and inclusive nation,” Moses twitted after the meeting.

The MP said the two leaders (Uhuru and Raila) have proven that they would like to leave a legacy worth emulating and are concerned about their motherland.

“I welcome that [meeting], it is good for the country and especially the future of the country,” Kuria said.

The meeting with the MPs comes a day after Raila met with Uhuru for the second time in public at the Muthaiga gold club.

Uhuru was seen greeting Raila with an amusement as other officials around them smiled and laughed.

Raila was clad in a jungle green trouser, navy blue shirt and a cap marching his trouser greeted Uhuru as they walked towards the golf.

ODM and Jubilee government are working together to bring Kenyans together and end electoral justice and Kenya.

Raila’s ODM party has maintained that it will continue to play its role as the opposition party, but will always engage the government on development matter.

The Esther Arunga story: A closer look at the lives of Kenyan TV girls