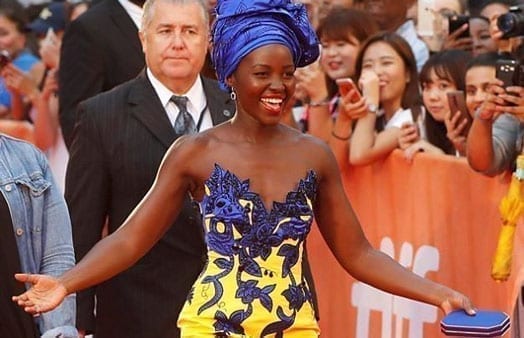 Kenya’s shining star in Hollywood continues to glow brighter and is about to forever stamp her presence in the industry.

Lupita Nyong’o will be getting her own star on the Hollywood Walk of Fame, as was announced on Monday by the Hollywood Chamber of Commerce.

She will be honoured together with other Hollywood heavyweights such as Tyler Perry (mostly known in Kenya for his portrayal of Madea), Daniel Craig (who played James Bond), Terrence Howard (famous for his role in the TV series Empire) and Cedric the Entertainer.

The Walk of Fame is a pavement embossed with stars made of terrazzo and brass. The first star was laid on March 28, 1960, and currently has slightly over 2,600 stars on it.

It is one of Hollywood’s biggest tourist attractions, receiving an average of 10 million visitors every year, with visitors longing to have a look at a memento of their favourite stars.

Getting one’s name on it is a highly sought after honour, as it lends permanence to your role in the industry, with your name being on it forever.

Lupita already has numerous awards and an Oscar for Best Supporting Actress for her role as Patsey in 12 Years A Slave.The process of receiving a star on the Walk of Fame is surprisingly more complicated than that of winning an Oscar.

According to the Walk of Fame’s official website, the person must be nominated by a third party for one of five categories: radio, motion pictures, live performance/theater, television and recording and the celebrity or their representative writes a letter of agreement accepting the nomination.

Afterwards, the Chamber of Commerce, which meets once in June, decides who among the nominated people gets to have a star.

They receive over 200 applications each year but only a precious few are selected, (20 to 24 stars per year, but with slightly over 30 celebrities selected this year).

Once selected, the star’s sponsor pays Sh4 million to have the star and the money goes towards the cost of promotion, star ceremony, and future upkeep of the star.

The idea was conceived in 1953 by former president of Hollywood Chamber of Commerce E M Stuart, with an aim “to maintain the glory of a community whose name means glamour and excitement in the four corners of the world.”

Lupita is yet to comment on receiving the award, and the dates for the unveiling of the stars are yet to be announced. Each star has its own grand unveiling ceremony chosen by the celebrity.

This is just the latest in a string of enviable achievements for the 35-year old, a highly sought after actress whose list of awards and nominations are so many they have their own lengthy Wikipedia page, separate from her personal profile page.

She most recently starred as Nakia, a major character in the superhero film Black Panther, which was one of the grossed over $1.3 billion worldwide, the ninth-highest-grossing film of all time.

VIDEO:Kenyan Ladies in Saudi Arabia Dress Up in Their Employers’ Turbans and Dance

Drivers Scramble For Cash on I-270 in Marland After crash

A friend of my son’s passed away from a drug overdose.