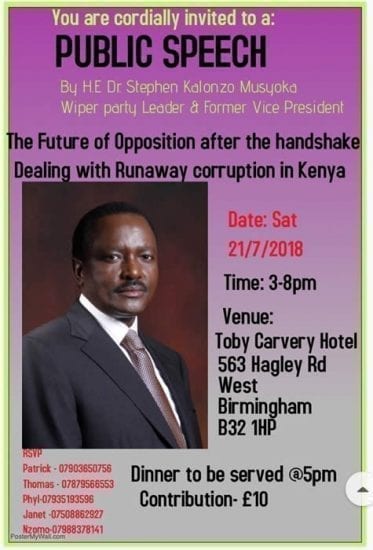 Kenyans in Birmingham are preparing for the visit by a former Vice President of Kenya. It is the first time such a high ranking Kenyan personality has visited the Midlands.

He will give a public speech on the future of opposition and also on Runaway corruption. According to one of the organisers, Patrick Kiilu who is the chairman of the wiper Uk , the objective of the visit is not politics.’ Elections are over and it’s time to unite the country and move foward and this cannot be achieved without knowing the role of the opposition after the handshake .

Also as stakeholders of Kenya, we would like to know how the government is dealing with runaway corruption as everyday we read in the news of a scandal involving millions.

Kenya needs to be sanitised and made conducive to all not just a few. Kenyans are invited to this public speech that will be held in Toby Carvery, Quinton in Birmingham on Sat 21st July 2018 from 4pm till 8pm.

VIDEO: Kenyan pastor says there is no Coronavirus