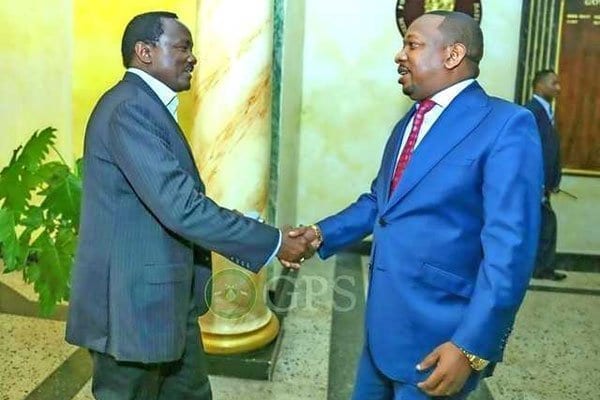 Nairobi Governor Mike Sonko has pledged to support Wiper party leader Kalonzo Musyoka’s bid for presidency in 2022, promising to campaign for him.

During the Wiper Komarock II convention in Matungulu on Friday, the Jubilee-affiliated governor said he will rally the Kamba community and Kenyans at large behind the Wiper Democratic Movement leader.

Mr Sonko, believed to be a close confidante to President Uhuru Kenyatta, said he will use his resources to campaign for Mr Musyoka, who has been castigated in certain quarters as a ‘non-starter’ in the 2022 presidential race.

“I understand the President more than anyone else around here, you can call me the errand boy of the president. As it concerns the handshake pact, I know very well that Musyoka is in the front-line. We will rally behind you (Musyoka),” he said.

“I do not need to vie for the presidency. What I want to do is to help Musyoka, our elder brother move forward, to help you until you retire or you become old,” said the Nairobi governor.

Sonko Impeachment hearing: Saumu flew to US on taxpayers…

Mr Sonko insisted that he understands too well the ‘handshake’ deal and that Mr Musyoka knows the secret of the pact, contrary to a popular understanding that he (Musyoka) was kept in the dark.

He went further to commit his personal community mobilisation outfit — the Sonko Rescue Team — in campaigns for the former vice president.

“Just the other day, the President and Raila entered into a pact. Mr Musyoka knows it very well,” he said and reprimanded Ukambani governors who have been leading a campaign against the de facto Kamba kingpin.

“Unity is very important in any community. When Raila went to Nyanza with the president, I saw all Nyanza governors, MPs and MCAs. I will make sure that our community is united. I request my colleagues to respect Mr Musyoka. I will look for them because we must unite our community,” he said.

“To the people who are calling Mr Musyoka an errand boy, you should just leave it, we know how to insult very well. When Raila went with Uhuru in Nyanza to launch development projects, was he an errand boy of the President?” He posed.

He called for a change in strategy in national politics, promising to fund conventions and meet-the-people tours in Makueni, Kitui, Machakos and elsewhere in bid to unite the community.

Jubilee nominated Senator and secretary general to the Mt Kenya MPs caucus Isaac Mwaura, who was in attendance, threw his weight behind the Wiper leader saying he has been “anointed” for the big seat.

Word of the Day: I will be with You