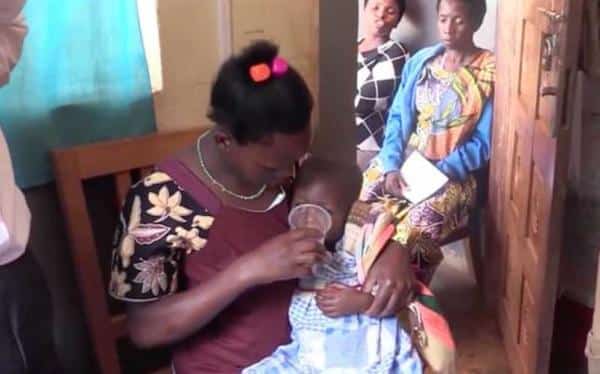 Uganda faithful drink ‘miracle-cure’ bleach: “Do not listen to what some prophets are prophesying to you; they fill you with false hopes. They speak visions from their own minds, not from the mouth of the LORD,” God says in Jeremiah 23:16.

With each day, thousands of believers continue to flock churches for hope. Hope that with the many fake pastors, they seemingly will never fulfill.Pastor Robert Baldwin told his Ugandan followers drinking the ‘Miracle Mineral Solution’ concoction eradicates cancer and HIV/Aids, among other terminal illnesses.On May 19, Ugandan authorities were investigating the scheme run by the American cleric. More than 50,000 people drank a ‘miracle cure’ allegedly made from industrial bleach.Baldwin’s intricate network at Global Healing Church was unearthed by the Guardian newspaper.

The article revealed how the 52-year-old imported citric acid and sodium chlorite from China into Uganda.”The ‘church’ advertises itself as ‘using the power of Almighty God … to greatly reduce the loss of life’ in Africa,” it said.Baldwin stirred the solution, chanted a few verses from the Bible and voila, had a cure for HIV.What his followers did not know, is that when the two chemicals are mixed they produce chlorine dioxide, which is a bleach commonly used in cloth-making.Pastor Baldwin, however, is a case among many in Africa who take their flock for a ride.South Africa

In South Africa, Pastor Alph Lukau made the headlines after he claimed he resurrected a man.In the video that went viral two months ago, Lukau is seen walking to a hearse and opening a coffin. Inside, was the body of a young man named Elliot.He then places his hands on Elliot’s body, moves them up and down and Elliot rises from the dead amid wild cheers from believers.The story they peddled looked airtight, even Elliot’s landlord said he had fallen ill and had started “coughing a lot”.

Pastor Victor Kanyari to Betty Bayo-Forget about me and move…

Betty Bayo Bleached Her Skin to Please a Man Who Later…

Everything began to crumble when the funeral home mentioned in the video distanced itself from the incident or having Elliot’s body.Just how gullible were Lukau’s followers?Alph Lukau was described by his followers as a man of God with the gift to heal.He is alleged to be the richest pastor globally.Lukau heads the Alleluia Ministries International, which has branches in South Africa, Angola, Namibia, Zambia, Democratic Republic of Congo and in South America.In yet another South African incident, a pastor is said to have used a live snake ‘to perform miracles’.This is one of the many extraordinary moves pulled by Pastor Lesego Daniel.

At one time, he fed his congregation grass and petrol.The leader of Rabboni Centre Ministry in Pretoria put the snake at the centre of the communion which was later shared by his flock.While this may have been a bother to many, the members of his Rabboni Centre were unshaken.Zimbabwe

In Zimbabwe, Prophet Walter Magaya was arrested for claiming that he cured HIV/Aids.Magaya said the organic drug that he named Aguma could cure Aids in 14 days.He ministered at the Prophetic Healing and Deliverance Ministries.When he appeared before a court he pleaded guilty and was fined $700 (Sh70,777).Kenya

In Kenya, the story of Pastor Victor Kanyari, who rebranded to Bishop Mwangi, is synonymous with his African peers.Kanyari is the shepherd at Salvation Healing Ministry.He was exposed in 2016 for using potassium permanganate to perform fake miracles.

Potassium permanganate is a chemical compound that turns purple when dissolved in water.Kanyari used this chemical reaction to make faithful believe his prayers healed diseases.All they had to do was step into the water and watch as their illnesses got ‘washed away’.In return, Kanyari asked his believers with prayer requests to panda mbegu, loosely translated to mean ‘plant a seed’.This was made possible by sending Sh310 to him through mobile money transfer.In Kenya and Africa, churches have become a source of income for many rather than a house of prayer.The question remains, are faithful too desperate or plain ignorant to be blindsided by such stunts?