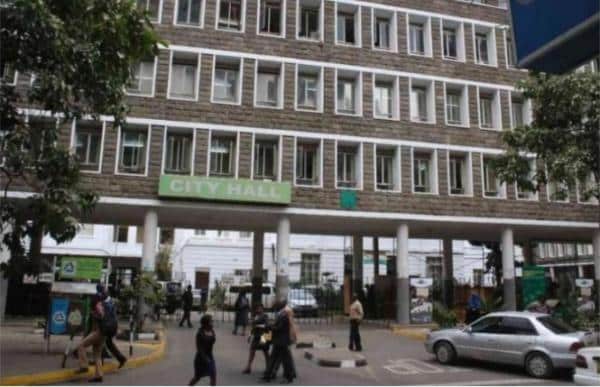 A man caused havoc on Thursday morning 11 July near City Hall after chaining himself to the metal grills.

Nairobi Governor Mike Sonko Mbuvi, uploaded the photos of the man on his Facebook page saying that he threatened to hang himself if he is not allowed to see president Uhuru Kenyatta.

“Whoever is near city hall. Huyu jamaa ako hapo sai anasema kama haoni President uhuru sai anajinyonga. One word for him – (Whoever is near City Hall, this man has threatened to hang himself if he is not allowed to see President Uhuru),” Sonko posted.

The man, whose identity is yet to be confirmed was carrying two posters indicating what he wanted. The first poster read ‘Help me to see Mr. President, Governor Sonko, Senator Sakaja, MP. Korir’.

This incident comes weeks after a fifth year Jomo Kenyatta University of Agriculture and Technology (JKUAT) Student, Brian Bera, tried to enter the State House in an attempt to harm President Uhuru.

Authorities said Brian defied an order to stop after he was caught trespassing into the State House grounds and instead drew a knife on a security guard.

He was however shot on his arm and later taken to custody.

Video:K-Nel interview with Kenyan man brutally Attacked by The Neo Nazis in Berlin