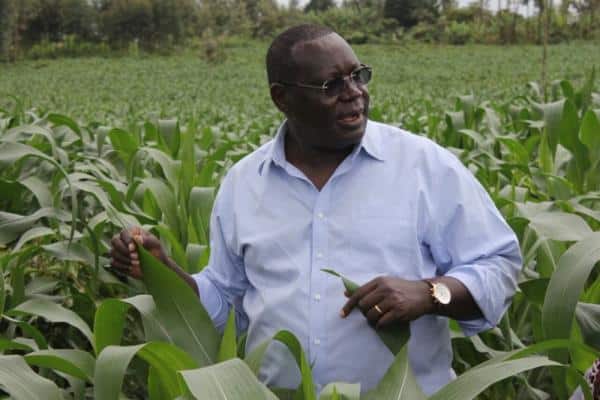 The Man to manage Kiambu in Waititu’s Absence-James Nyoro having the last laugh? Embattled governor has previously claimed his woes are the work of his enemies led by his deputy.

Dr James Nyoro was touted as the better option for the job of Kiambu Governor but ended up deputising Ferdinand Waititu.

The two are not only worlds apart in terms of academic qualifications but also management and leadership experience.

While Waititu’s degree in Economics and Commerce at Punjab University has previously been doubted, Nyoro is an Agricultural Economist from the University of Nairobi and London’s University Wye College.

Nyoro also worked as Senior Advisor to President Uhuru Kenyatta in food security,  water and climate change after losing his bid for Kiambu governor in 2013. He was also the Advisor to the Cabinet Secretary, Ministry of Agriculture, Livestock and Fisheries.

No sooner had the two been elected than they fell out with Nyoro accusing his boss of sidelining him from the running of the county’s affairs. He said the governor was running a one-man show and even the input of the county executive committee was highly regarded.

However, with the court on Tuesday barring Waititu Baba Yao from stepping in the Kiambu county offices until the case involving alleged irregular procurement of a Ksh 588 million tender for upgrading of various gravel roads to bitumen standard is heard and determined, Nyoro is having the last laugh. He effectively takes over the role of governor.

And with the possibility that the case may drag on, Waititu’s political goose is as good as cooked.

Lady Justice Ngugi held that like other civil servants, governors should step aside once charged for a criminal offence and declared a section of the law protecting them unconstitutional.

“It seems to me that Section 62(6) apart from obfuscating…are contrary to the constitutional requirements of integrity in governance, are against the national values and principals of governance and principles of leadership and integrity in Chapter Six,” she ruled following an application by Samburu Governor Moses Lenolkulal, who was similarly barred from accessing his office.

Amid divisions among lawyers on the issue, the ruling has sent shock waves among governors who fear their deputies may use it to assume their coveted offices.

Waititu has previously claimed his woes are the work of his enemies led by his deputy.

What awaits Uhuru in Bensouda face-off