Ms Waiguru said a wind of political change has hit central Kenya under the leadership of President Uhuru Kenyatta, throwing open the region’s choice of a presidential candidate in the 2022 General Election.“If it is Raila, he should know that the region will want a piece of his government,” Waiguru said in an exclusive interview on KTN News’ PointBlank.

Waiguru, who has had a frosty relationship with Raila, described the Orange Democratic Movement leader as ‘someone who understands the significant role that women play in Kenya’s politics.’

The cocky relationship between Raila and Waiguru hit rock bottom in 2016 after the opposition leader linked her to the multi-million shilling scandal at the National Youth Service (NYS).

Waiguru, who was at the time a powerful minister in charge of Devolution, Public Service, Youth and Gender Affairs, responded to Raila’s claims with a legal suit which she dropped after their hostilities ended last year following a meeting at the opposition leader’s Nairobi Capitol Hill offices.“We discussed some serious politics.

Of course we first settled the history we had together,” Waiguru said during the interview.The prevailing rapprochement between Raila and Waiguru began in November last year after she withdrew the suit and announced the launch of a new friendship,” in the interest of national development.”Raila’s political dalliance with Waiguru became even clearer last month after the former PM accompanied President Uhuru Kenyatta to the governor’s wedding in Kirinyaga last month.

Waiguru tied the knot with Nairobi lawyer Kamotho Waiganjo in a traditional wedding that was attended by prominent politicians and businessmen.“In politics, formations happen.

Those who showed up at the wedding were there either to confirm their membership to emerging political formations or friendship,” she said.Asked whether she had made up her mind on a joint political formation with Raila ahead of 2022 elections, Waiguru said it was too early to decide.“It was not really about future formations, but to support Mr Kenyatta’s decision to shake hands with Mr Odinga.

You know this country was not in good shape after the 2017 elections,” she said.Waiguru said she had assured the ODM leader of her unwavering support for the handshake through ongoing activities of the Embrace Kenya team.

Waiguru delved deeper into politics of the day with a strong opposition to Dr Ekuru Aukot’s Punguza Mizigo referendum Bill that seeks to reduce elective positions among other key constitutional changes.

She said the Bill risks locking out women from adequate representation in the political arena, ‘an issue Raila himself is against.’“Raila understands the challenges women are facing.

He has spoken firmly about it even during the funeral of Joyce Laboso (the former Bomet Governor),” Waiguru said, insisting that women must have representation at the executive level.Waiguru’s warming up to Raila stands in stark contrast with past speculation that she was angling to be Deputy President William Ruto’s running mate in 2022.

The governor was, however, categorical that her new dalliance with Raila does not mean she was turning her back on the DP who did not show up during her wedding.

She said attendance of the wedding was voluntary and the absence of Dr Ruto should not be misinterpreted to mean a souring of the relationship between them.“Being a member of the Jubilee Party, we have to separate matters concerning the party from those of the handshake.

President Kenyatta is the party leader and Dr Ruto is the deputy party leader,” she said adding that “when time comes, we will make a decision on the direction the party will take. “Ultimately, Kenyans will determine who will run the country.

It is not an individual’s decision.”Waiguru insisted that in the meantime, she will continue to position herself as the voice of Mt Kenya region ready to take the mantle of leadership if considered in 2022.“If you go to our region, people are talking and assessing. President Kenyatta will lead us in making a decision as Mt Kenya on how the political formation will look like.“Whether it is Raila or someone else, the presidential candidates must to know Mt Kenya needs representation at the top. At the moment, it would be preemptive.

We are open and are uniting,” she said.Waiguru said she was sitting pretty having cleared all obstacles that were weighing her down and threatening her positioning as a voice in Mt Kenya region.She cited the clearance of corruption allegations following the loss of about Sh791 million at the NYS during her tenure as Devolution Cabinet Secretary.

The governor, however, maintained that she had serious reservations as to how investigators handled the matter, saying it did not meet her expectations.“The investigations have vindicated me, but not as I would have preferred it done.

Simply put, if you have been investigated, it is made public, you go through swinging doors, press statements are issued saying they are investigating but when they don’t find anything, they keep quiet,” she said.“When they find that there is nothing, and they do not make it public, they leave room for speculation.”On the flip side, Waiguru said, the allegations had come as a blessing in disguise having catapulted her into her new role as an elected leader in Kenya.“There were lots of rumours and politicisation of the issues.

It was a tough time for me as an individual but if you look at how it eventually got me where I am, I think you sometimes have to go through such challenges,” she said.Besides, Waiguru said the Supreme Court’s dismissal of a long running petition challenging her election as Kirinyaga governor had relieved her.

Ms Martha Karua, her rival for the gubernatorial seat, had until last week fought a long-drawn legal battle seeking to nullify Waiguru’s election.The governor also revealed that her recent marriage to Mr Kamotho was another step towards earning acceptance in Mt Kenya region.

She promised Kenyans to be on the lookout for “a more aggressive Waiguru” that will seek to unite the region and stop it from falling apart.Waiguru lashed out at some leaders she accused of sowing seeds of disunity in Mt Kenya region through false claims of neglect and alleged plot to assassinate DP Ruto.“There are people working hard to split the region so that we have no voice and representation in the future,” the governor said adding that “assassination claims were meant to isolate Mt Kenya. 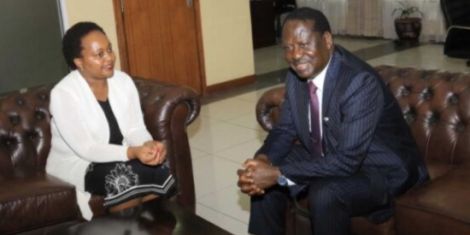 Kenyan pastor passes away in UK

Strictly Speaking! Investment groups and the Church Platform-A time bomb in the…