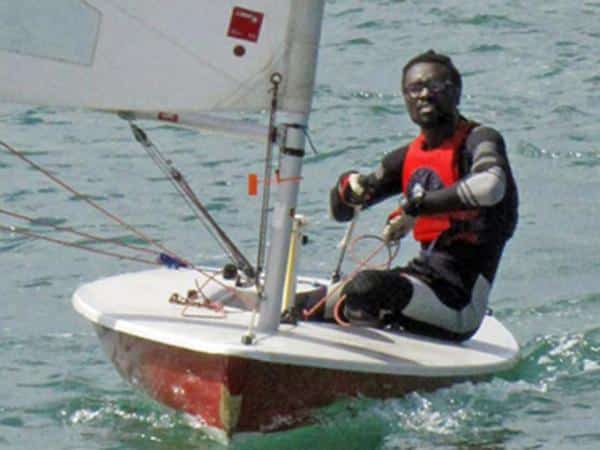 Like many a sailor around the world, Teddy Ndaro (KEN) has a dream – to represent his country in the 2016 Olympic Games in Rio de Janeiro, Brazil.

He is not unique in that, but in doing so he would become the first-ever native Kenyan to sail in the Olympic Games. He knows it is going to be an uphill struggle, not only to be competition ready, but also to manage the logistical and financial burdens that come with such a challenge.

Strangely, sailing is not a large participation sport in Kenya, despite the excellent sailing conditions along its coasts and on its many lakes. Teddy explains, ‘It is a very difficult to participate in sailing in Kenya because there is not much support for the sport or its participants. So far, all my sailing has been self-funded.

‘The sport of sailing is also suffering here because participation numbers go down every year. Since it is mainly a white dominated sport, many of them of the older generation, it means the numbers are low and reducing. A few natives like myself are trying it out but there are still not many because of lack of equipment. Most equipment is privately owned, and it is very expensive to own a boat, and to participate in the events, making the locals less likely to take part.’

Now 28 years old, Teddy was introduced to sailing by his older brother, Samuel, 12 years ago. Teddy got hooked on the sport and has developed into one of the Kenya’s best sailors. Last year he launched his campaign for the Olympics, ‘Teddy for Rio 2016’.

He currently sails a Laser out of Mombasa Yacht Club, one of the largest yacht clubs in Kenya and while his trophy haul there is impressive, his dream is much bigger. He explained the appeal that sailing brings. ‘It’s the ability to interact with the forces of nature that gives me the thrill and attracts me to sailing. Propelling the boat using wind and currents in the water, plus the physical aspect of the sport is exciting yet challenging. Racing then lets me use all the knowledge gained over the last 12 years to compete at the very top level. I am very competitive so I am always pushing myself to do better, so the racing part is also interesting for me.’

In March 2014, Teddy represented Kenya at the ISAF Development Symposium in Cape Town, South Africa and took a lot of encouragement from the experience. His club is also trying to help him achieve his dream with the commodore, Chris Soper, even donating his newer boat to help Teddy train and race at the club.

As well as being a qualified Royal Yachting Association Dinghy Instructor, gained after a time spent in the UK from 2008 to 2010, Teddy owns a tour company called Costo Tours and Adventure Activities, which specialises in safaris and day trips along the coast. Unfortunately Teddy is otherwise lacking in home grown financial support.

‘Although there is moral support, a lot still is needed financially. Mombasa Yacht Club has supported me financially before in 2012 but since then they have been busy with club development projects so cash has not been easy to spare. The Kenya Yachting Association (KYA) has been helping me with writing me letters to support my application for visas, but I think more could come from the clubs and the KYA on supporting their athletes but hopefully good things will happen in the future.

‘Sadly, with not much funds to spare, I have no budget to do any European events, which is a shame. There are a few local events that I plan to go to and these shall be key in my preparations. My cry for sponsorship and support from the sporting authorities has not been heard yet but I am still fighting on. I have come too far to give up now.’

Also, though grants are available from the International Olympic Committee (IOC), Teddy is not eligible. ‘I am not eligible because they have to be made through the National Olympic Committee of Kenya (NOC-K). KYA is not registered as a national sport yet by the Kenya National Sports Council and so sailors are not recognised by different sports national authorities and so we miss out on these. This is because the NOC-K will only endorse applications by registered Federations.’

No stranger to top-level competition, Teddy has already represented Kenya in the All African Games in Maputo, Mozambique in 2011. ‘After participating in Maputo, I met Allan Julie, a sailing legend from Seychelles, who inspired me as it showed that in Africa we can also work hard and compete at the top level. It was possible then and the proof of that was right in front of my eyes and so the building blocks for the ‘Teddy for Rio 2016′ campaign were laid there and then, in Mozambique.’

He also travelled to Poland in 2013 to train and race against the best Polish sailors. ‘I was training with top Polish coach, Robert Siluk, and he taught me tactics, sail setting, hiking techniques and downwind technique, which I am still trying to improve. I also saw the amount of work and effort sailors had to put into performance sailing. Training very hard every single day in the cold Baltic sea was a tough challenge and even though it was difficult, I loved every single minute I was there.’

‘Teddy for Rio 2016’ is a bold plan. To sail in the Olympic Games in Rio, Teddy must first qualify Kenya for a place on the starting line. There are several chances to do that, the first being at the ISAF Sailing World Championship, in Santander, Spain in September 2014.

However his first challenge is to actually get a boat and himself to Santander. ‘To get to Santander I need to first of all get help with funds, so I am looking for sponsors. So far, I have been getting friends in the sailing community who have been offering me air miles to cover my air travels. Apart from that, I have not made any progress with sponsorship, as companies in Kenya are not responding to my applications.

‘For Spain, I am looking at two possibilities. One is to charter a boat, which is going to be expensive, as I do not have any money to pay for that. The other option is to ask my Polish friends to bring one for me if they will be trailing their own boats to Spain. Hopefully that will be a cheaper option.

‘To qualify for the Olympics, I need to go professional and sail full time. This means training hard and hiring professional coaching and medical services as well as competing at the highest level to gain experience and to know what it takes to perform at that level.’

While sailing suffers from lack of numbers in Kenya, Teddy believes that it can be a growth sport providing basic administrative infrastructure is put in place. ‘ISAF has started training and education people on training methods and structures on how to manage the sport. Apart from that, they are awarding scholarships for athletes from emerging nations who aspire to perform at top-level events such as the world championships and Olympic Games to get training and coaching. Lots of support also needs to come from the government through the ministry of sports through funding and educating people that there are other sports out there for people to enjoy apart from the usual stuff. Making the sports accessible to everyone will also help promote it in the country.

‘Kenyans, and Africans in general, I think see sailing as either a rich man’s sport or a whites only sport. It may be also because of lack of facilities and equipment for training and racing. Facilities can be a problem as a lot of the clubs are still members’ only clubs so not allowing the majority of the people to come and try out and experience the sport. If the clubs and centres would open their doors more to people, then I believe the participation would increase and the sport would grow tremendously. Fear of the water could be another thing because a lot of people don’t know how to swim so they are afraid to try and learn how to sail. Last but not least, funding to develop the sport and allow athletes to get proper training and racing experience abroad where all the action is also limits the athletes and sailors to the low levels that are present in the country.

‘I was brought up in a modest middle class family and we had our fair share of ups and downs. When the opportunity presented itself, I took it and ran with it. The catchword here is opportunity. I think if Kenyans get presented with the opportunity to participate in the sport then we shall be a force to be reckoned with. We can be a great sailing nation. I think I am proof of this theory.’

To get competition ready by September Teddy is trying to put as much time as he can on the water to improve his boat handling techniques, while out of the water, maintaining a healthy diet and getting in some physical exercise to condition his body for the beating it takes while racing in competitions, are priorities.

Apart from a British settler representing Kenya in 1964 in the Finn class, no Kenyan has sailed in the Olympics. ‘As for the natives or citizens, there has been no one who has ever represented Kenya in the Olympics and so my inspiration is to be the first.’

He has a look of steely determination in his eyes that convinces you he will succeed in his goal. ‘It would be a dream come true for me to be able to race amongst the legends in the Olympics. It would be my greatest achievement, one that I will always cherish and remember for the rest of my life.’

Shamba Mkononi App by Optiven: Mobile App use in Kenya rises by 29%