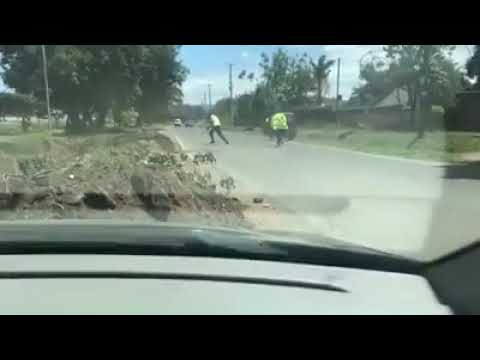 A video has emerged of a Tuk Tuk driver attacking two police officers manning a roadblock at an unknown location.

The 42-seconds clip shows the driver of the rickshaw, plate number KTWB 757D, furiously hurling stones at the two policemen as they fled for their safety.

Whatever transpired between the officers and the Tuk Tuk driver is yet to be established. The attacker floored one of the officers, ostensibly after a wrestle.

He gets into his vehicle and starts driving off, seemingly in an attempt to run over the cops. The officers fought back by throwing stones at the irate driver.

The traffic police seemed unarmed and were overpowered by their attacker.

At one time when such attacks were rife, an order was issued allowing traffic police officers to be armed.

A number of social media users condemned the attack on police officers, saying Kenyans must respect the crown.

Others said the driver’s situation mirrors that of millions of Kenyans frustrated by police officers’ excesses.

Gone Too Soon: Promotion to glory for Kimani Karangu of Atlanta Georgia

Raila in plan ‘to form super coalition with five parties’