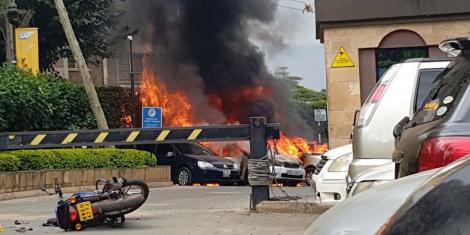 The attack on Dusit D2 Hotel, Riverside Nairobi began on Tuesday evening at around 3pm after gunmen made their way to the premises.

According to eyewitnesses, the attackers reportedly stopped a short distance from the facilities main gate for about 20 minutes.

The alleged 6-gun men were said to have embarked from their silver 5-seater hatchback and before marching towards the gate.

To forcefully gain access to the hotel, the attackers hurled grenades at the security officers manning the gate.

The resulting explosion saw three car burst up in flames.

Security agents moved in quickly although gunshots were heard close to 20 minutes after the attack.

Al-Shabaab, on Tuesday, claimed responsibility of the Dusit, Riverside attack in Nairobi.

This is the car that was allegedly used by Riverside attackers

Witness recounts events before and during the Riverside Attack