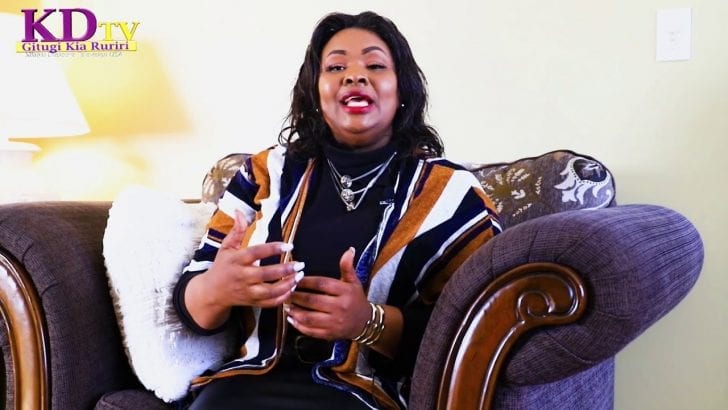 Gospel singer and pastor Joan Wairimu has for the first time spoken about being in an abusive marriage for over 17 years.

The ‘Pambazuka’ hitmaker was married to Bishop William Mwangangi until the two filed for divorce in 2013.

Joan initiated the case at a Nairobi court, where she sought orders of separation. Mwangangi filed a cross-petition, asking the court to dissolve the marriage. The couple got married in 1996 in church.

Speaking in a detailed YouTube interview, Joan says she remained in the abusive marriage for fear of how people would judge her because she was a public figure.

“For the sake of all people who know you as a role model, the congregation, it was difficult for me to walk out. I would smile and pretend it was all okay, but I was not because he did all wrongs to me,” she said.

Most attended Kenyan wedding in UK with over 1000 people-…

“He was cheating with church ladies, beating me and many times he threatened to kill me.”

Joan says by the first five years, she already knew she was in for big trouble, but she was determined to make it work and keep her family and marriage.

“It was a very hard reality to accept that someone you love can hurt you. It is not once or twice that I was threatened to be killed. There were so many times he carried a knife in the bedroom and told me it was the end and he was going to kill me and end his life as well,” she said.

Joan said her ex-husband would then apologise about it and life moved on. She says at one time, he bribed their houseboy to write a false statement of her wanting to have a sexual relationship with him.

“It was a public false accusation and there is nothing tough like when you are a public person trying to protect your name, then someone else is accusing you falsely to tarnish your name,” she said, adding that he kept threatening her that if she left the marriage, he would make sure her name is tarnished.

Joan says everyone, including his mother, saw danger, but she loved her husband. “I lost a nerve in one of the ears because of being beaten. My mother-in-law even told me to take care,” she said.

“I asked myself, who will I tell the children their dad is? The children had to do a DNA, and so I had to explain to them the reason they had to go through the DNA,” she said.

Joan relocated to Canada with her children and is the founder of Queens Ministry International.

Her songs include ‘Pambazuka’ and ‘Mungu Wangu’.